I present to you. . . The FIRST CHALLENGE PIN!! (If you have no clue what I mean by "challenge pin, click here)

Suggested by Julie E., a quick method to peel garlic. It looks easy enough so I pulled this trick out for the next recipe I had calling for garlic.

I started with just one small bulb of garlic. 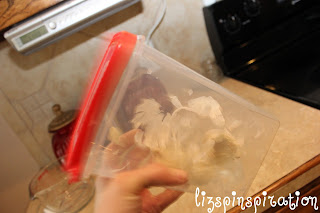 Things were looking promising, except for two little fellas that looked like this: 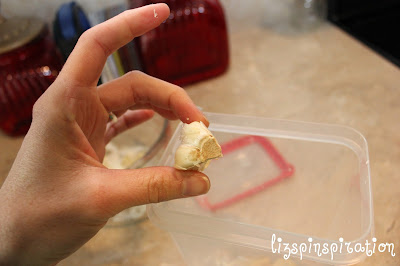 If the clove did not detach from the base of the bulb, there was zero peeling action going on. I popped these cloves off the base and gave them a few more shakes. 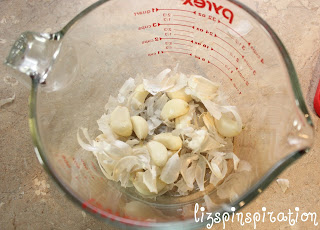 Voila! Poured the whole thing out and initially they appear to all be peeled. 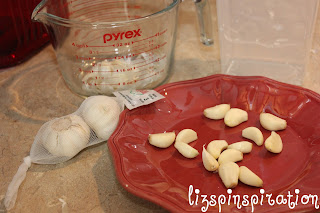 After fishing them all out, it is confirmed, that they all are peeled!

I will admit, I was a little surprised at the whole thing.

Total cost: The price of one garlic bulb. I bought three for $1.

Total time: 5 minutes including two shaking sessions and picking through the mess.

Final verdict: Cool trick for sure! Worked just as promised. However, I only needed 2 cloves for my recipe. Not sure that it wouldn't have been faster for two cloves to do it the old fashioned way and now I have an extra dish to wash. However, the next time I make 30-clove Chicken, this will be the way to go!

Time to put that garlic to use!
Original pin:

Meatloaf cupcakes!! So cute. I thought I could get my boys to fall for these, just for a teensy little moment. As you may expect, Eating Child likes meatloaf and mashed potatoes. Non-Eating Child sometimes likes meat but flat out refuses mashed potatoes. What kid doesn't like mashed potatoes??  I thought it was all a ruse and that I could prove it with my mashed potato "icing." This kid will do ANYTHING for a cupcake. I have a meatloaf recipe that usually goes over well with my family, but I decided to go with the recipe here to try it out.


I thought about skipping the bacon sprinkles but decided to include them in as part of the whole cupcake package. I did skip the chives however. By the way, you may have seen a pin about bacon in the oven. I haven't read it but I have been cooking my bacon in the oven for YEARS! I highly recommend it. I read about the oven method in a home magazine years ago and it totally changed my attitude about cooking bacon because it is just so easy. I just put a couple strips on a baking sheet and tossed it in the oven with the "cupcakes." 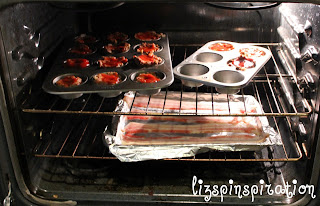 I originally planned on making my mashed potatoes from scratch, as suggested in the original post. But when I pulled my potatoes out of the pantry they were a little soft and went straight to the garbage bin. I subbed in the instant variety this time. Soon the meatloaves were ready! 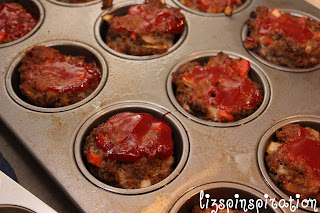 Now comes the tricky part!! After cooling, I transferred them all to a baking sheet and set about icing them. It took a few attempts to get a feel for the mashed potatoes in my icing bag. I wouldn't claim to be a super icer anyway. Some of these came out pretty sad! The bacon finished cooking soon after the cupcakes and I crumbled it up to add sprinkles. Here are a few of my finished creations--the good, the bad, and the ugly. Mostly ugly. 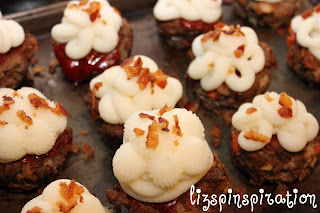 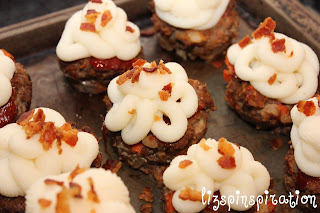 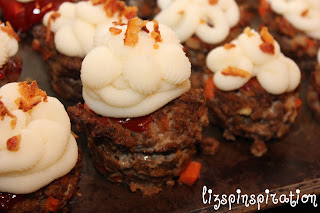 Upon seeing these "beauties" the boys were overcome with dinnertime excitement. Each wanted the one with the most "frosting." I gave L a little taste of the frosting and he just couldn't place it.  He said it was good, and it tasted like . . . something, but couldn't figure out what. I kept giving him little tastes because it amused me to watch him try to figure it out. I sat the boys down and served up their dinner cupcakes. 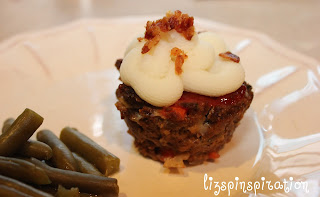 Their excitement dwindled quickly when they realized the truth about dinner. As would have been the case with regular meatloaf and regular potatoes, Eating Child ate and Non-Eating Child didn't. The recipe itself was good. It had a little too much oregano for my tastes, but that could be easily changed. I liked the carrots inside but a little too much ketchup with the additional on top.

Total cost: I only had to buy meat because everything else I already had. About $6 for ground beef.

Final verdict: The kids were underwhelmed and would have eaten/non-eaten with out the grand presentation. I think the presentation is cute and I felt a little like a gourmet chef putting so much effort into my food presentation. However, I probably will not spend the extra time to create an elaborate show. I may use the meatloaf recipe again, I may also bake it in cupcake tins to speed up cooking. The mashed potatoes had to cool quite a bit for me to be able to handle the piping bag so when it came time to eat they were really cold and a little unappetizing.  As I packed up the leftovers into plastic ware I thought about how layering them might make an interesting dish. Layer of meatloaf, spread some potatoes, layer meatloaf on top. Sort of like a mashed potato sandwich with meatloaf bread? The hubs is totally going to dig it.

Want to send me your challenge pin? Send me your favorite, least favorite, most interesting, most failed, skeptical, or any other pin on Pinterest and I'll try it out. Send to lizspinspiration@gmail.com .
Posted by lizzy at 7:35 PM