No source available. If this is your sweet creation, let me know so I can give you credit!!

Happy Valentine's Day! I caved at the last minute and decided to craft up some Valentines for the kids. I had already even spent my $1 for the easy boxed kind. I'm not against those, I have used them plenty. It was just when you pair my crafty heart with my new camera obsession and mix in a little holiday spirit, I couldn't resist the urge to create.

I pinned this image a loooooonnnnggg time ago. Possibly over a year ago. I think it is a cute and clever idea.

Getting the picture was a bit more difficult than I anticipated. I showed the kids what we were looking for and they were so excited to create and shoot that they were wiggling around like they had ants in their pants. There was much jumping and twirling and superhero-style posing. I had trouble with them getting the fist rotation and placement (i.e., not directly in front of their face) just right. As I was editing I was thinking about a way to make this easier. They need something that they would normally hold upright. I thought about maybe a clear juice glass. They would naturally be inclined to hold this upright, create the right shape with their hand, and have more of a natural "handing-off" pose. It could be easily edited out, cut out after printing for the lollipop, or just obscured when the lollipop was in place. I have these small glasses I found in the dollar spot that would have been absolutely perfect--had I thought of it before hand.

It took me three separate sessions (I don't get much time with these crazy boys) to end up with two mostly workable shots. Here is what I started with:


After a little editing magic I had these ready (minus the pinspiration marks, of course): 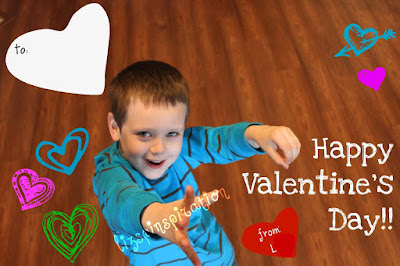 I printed these out at one of those store kiosks that print them while you wait. I don't have a good photo printer so I just loaded them on a thumb drive and ran to the store.

I made the mistake of stepping into a craft store while I was out and I stumbled across the most perfect cardstock. I had to buy it to mount the photos. I cut the cardstock a little bigger than the picture, used an exacto knife to cut some holes in the appropriate places, and started assembling.  When L got home from school, I sat him down with a sacred adults-only sharpie marker to write in his classmates names. W's school specifically asks for generalized cards to make it easier for the kids to pass their own.  In the middle of assembly we had to make an impromptu trip to urgent care for the world's worst nosebleed--ugh.

Sometime around midnight, I finished them up. They were not difficult, nor really time consuming to assemble, it was just so late thanks to our 4 hour urgent situation. Here are the final results! 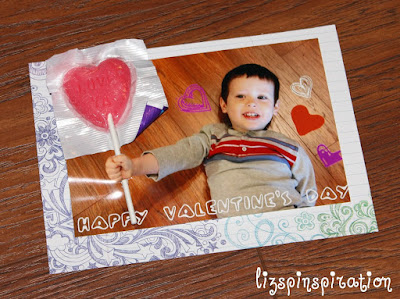 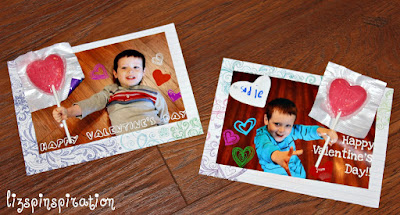 Total time: Really the actual photo taking was the hardest part. Assembly took maybe two hours because I had to cut all the cardstock to size. These would have been perfectly fine without the cardstock, but I like the look and it made them a little more sturdy.

Final verdict: I think they turned out pretty cute. Minus the funky hand position on L, but his friends will never notice that. They are going to notice the lollipop. I spent a little more than I planned, and way more than in years past where I use the dollar store box split between them both. I am happy with them. The boys had an absolute blast shooting them and getting them ready. I have honestly never seen my boys so excited to pass out their Valentines. We just may get in a tradition of photo Valentines. Also, while editing, I googled something about photo Valentines, and there are a ton of versions of this. Check out the image search for more ideas on posing and staging the shots. Another note, when you buy your lollipops, consider the wrapping. These had a lot of wrapping which limited areas of the photo that were visible when the lollipop in place so I had to account a large empty area in the picture.

And Happy Valentine's Day from Pinspiration!!
Posted by lizzy at 8:28 AM